Fenwick History: How do we remember the past? 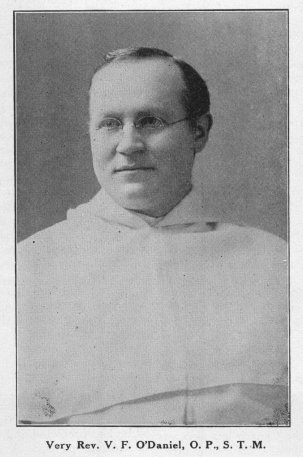 Long-time Dominican historian and archivist, Victor Francis O’Daniel, OP (1868-1960), downplayed the number of slaves reported to have been at St. Rose, calling an early now lost letter which noted twenty-seven slaves “certainly and error…[that grew] out of [the author’s] fertile imagination.”[1] Commenting on this sort of interpretation, current Dominican historian John Vidmar, OP, explained that “O’Daniel… suffered from a desire to have the Dominicans always come out on top. When it came to personnel, O’Daniel could be hagiographical… All too often, O’Daniel’s praise becomes hackneyed repetitions that a particular friar was the best preacher in the diocese, that dirt is still taken from his burial plot by local admirers, that his sermons are still the talk of the town to this day, that the Dominican church is the most beautiful in the area, etc.”[2] Surviving historical documents from the earliest Dominican experience in Kentucky are few. Some items were lost in a fire, others were deliberately destroyed by the recipient—a not altogether uncommon practice among Catholics dealing with sensitive issues like slavery. Fenwick himself admitted to burning a letter (which probably had nothing to do with slavery) as he had been requested to do. Other early Catholic leaders did this, as well.[3] O’Daniel altered some letters pertaining to Fenwick in an attempt to try to put Fenwick is more positive light.[4] Some Dominicans believe that O’Daniel moreover destroyed some letters that probably would have shed more light on Fenwick’s relationship to his slaves. John Vidmar nonetheless concluded that “Despite these shortcomings, O’Daniel’s contribution to the history of the [Dominican] Province of St. Joseph may not be his writings so much as the meticulous collecting of documents—letters, newspaper articles, transcripts of documents in foreign archives—which will always prove invaluable to any historian of the province.”[5] Another Dominican historian, Loretta Petit, OP, agreed, explaining that “Researchers praise his [O’Daniel’s] inexhaustible efforts to obtain and preserve the earliest letters and other documents needed for writing authentic history.”[6] Nine surviving letters refer to the people Fenwick called his “African slaves,” “Negro slaves,” or “Negroes.”

[1] Victor O’Daniel, OP, A Light of the Church in Kentucky, or the Life, Labors, and Character of the Very Rev. Samuel Thomas Wilson, O.P., S.T.M., Pioneer Educator and the First Provincial of the Religious Order in the United States (Washington, D.C.: Dominicana, 1932), 220, footnote 3, referring to Wilson to John A. Hill, July 23, 1820 (a letter extensively quoted in O’Daniel’s text).