After the Society of Jesus, or Jesuits, took control of the Athenaeum in 1840 and renamed the school Saint Xavier College, about two thirds of the two hundred or so boys who attended the school were from the Cincinnati area and enrolled as day scholars (now called commuters). The remaining third of the student body were boarders. Most of the boarders came from southern states, with the Jesuits specifically targeting Catholic families of wealth from Louisiana. Almost all the boys from the south came from slaveholding families. As a result, the student body from 1840 to 1854 (when the boarding school closed) included a mix of students, as shown below.

Most day scholars were first-generation Americans with about half born in Ohio. The rest largely hailed from other northern states including New York, New Jersey, and Pennsylvania.

About two thirds of the American-born day scholars came from immigrant parents, half with Irish roots, others with German or British heritage, and a few with French ties.

Joseph Musick’s great-great Grandfather, George Musick, Sr., migrated from England to Virginia probably about the time that tobacco took off as a cash crop around 1700. Subsequent Musick generations prospered. In 1794 George’s son, Revolutionary War Veteran Abraham Musick, Sr. led a group of people to Illinois. He eventually settled his family at Florissant Missouri, where two generations later both of Joseph’s parents, Marguerite Presse and Joel Lewis Musick, were born. While previous Musicks were Protestant Episcopal or Baptist, Joseph’s parents were married in 1825 at the Catholic Church in nearby Ferdinand. They gave birth to three children, Zilda, Joseph, and Amanda, in 1826, 1827, and 1829. In 1830 his father prospered as a lawyer and judge owning five slaves, but suddenly passed away two years later when Joseph was just five years old.[i] When the former president of the College of Saint Louis, John Elet and several of his Jesuit companions agreed to take control of the College of the Athenaeum in Cincinnati, they brought with them then thirteen-year-old Joseph, enrolling him in late 1840 first among the students to attend what they renamed Saint Xavier College. Joseph attended for two years, joined the school’s Philhermenian Society, took a year off, and then returned in August 1843. Sometime thereafter, probably in 1844, he was, as one Jesuit noted in the school records, “shot accidentally in St. Louis,” where Joseph presumably died.[ii]

[i] Joseph’s mother was pregnant at the time of his father’s death with a fourth child, Julie, but she died before she was a year old.

[ii] Joseph’s sisters, Zilda and Amanda, remained close the rest of their lives, marrying men who earned millions of dollars in the railroad industry. They who contributed significantly to the development of the town of St. Joseph’s in western Missouri, and also donated significant sums to the Catholic Church. 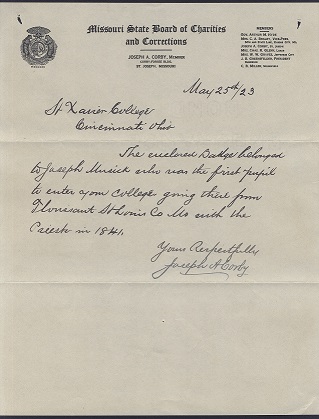 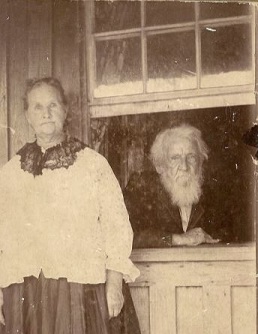 On February 15, 1852, William Stack Murphy, a Jesuit familiar with the Jesuit schools then in Ohio, Kentucky and Missouri, wrote to the Superior General of the Jesuits, Jan Roothaan,

“Cincinnati, being in a State where slavery does not exist and where the blacks are better received, a number of Louisianians sent thither their children of mixed blood.  Bardstown and St. Louis could not receive them without offense.  Moreover, all the white pupils would leave at once.  Black or mixed blood does not find liberty and equality except in Canada and Spanish America.”*

Researchers have identified some students who were "children of mixed blood."

Dion Birney (1823-1863) was the son of abolitionist newspaperman, James Gillespie Birney (1792-1857) who twice ran for President of the United States on the Liberty Party ticket. Dion attended Xavier in 1842-43 (and possibly in 1843-44). On July 4, 1843 Dion spoke to the Xavier community on “The Progress of Freedom.” Using the eloquence of the day, Dion praised the United States for introducing political freedom, yet also criticized past legislation for forgetting the poor, decimating Native Americans, and shamefully mistreating African Americans. “Let there be no slaves,” Dion proclaimed. Dion's older brother William Birney reported that Dion “acquitted himself pretty well [in the address], receiving several times the plaudits of the audience.” The Xavier Student Group, the Philopedian Society, voted to preserve the speech in the group’s records. On August 17, 1863 Dion died at Cincinnati evidently due to wounds suffered while fighting for the Union Army at the Battle of Gettysburg.

As day scholars paid either $40 (Classical Course) or $24 (Mercantile Course), and boarders paid $150 each year, boarders provided a significantly higher percentage (about 75%) of the gross income of the school.

And as almost all of the boarders came from slaveholding families, these numbers suggest that in the early years after the Jesuits took control of Xavier the income of the school depended significantly upon persons who earned some of their livelihood exploiting slaves.