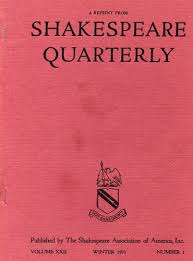 Shakespeare Quarterly is a peer-reviewed journal dedicated to essays, articles and notes in the area of Shakespeare studies. It was established in 1950 by the Shakespeare Association of America, and has for several years been considered one of the most prestigious and credible journals that collects new information on Shakespeare and his age, debates on the latest research, and reviews of significant recent performances and publications to keep readers up to date with Shakespeare criticism and scholarship.

Studies in American Fiction publishes scholarly articles on a wide range of U.S authors. In addition to a highly diverse selection of authors- everything from Melville to Morrison- students can also expect a variety of critical theories and annotated bibliographies. The journal prides itself on renegotiating traditional expectations of genre and writing on whole. Early editions are largely focused on a more traditional canon, while later publications bring more diversity into the mix. Although mostly traditional this journal strives to remain on the forefront of literary criticism and theory.

The Lion and the Unicorn is an academic journal published by Johns Hopkins University Press. Since its first issue in 1977, the journal has focused on children’s literature and how external cultural factors in society are represented in children’s literature. The journal is published three times a year, in January, April, and September. Each issue begins with an introduction, occasionally written by the editor, which highlights where the inspiration for the abstract of the issue came from, a brief overview of the contents of each article, a section containing book reviews, and a list of any other works referenced throughout the issue. The abstract focuses on a general topic, such as multiculturalism, music, or social classes. The articles submitted respond to the topic, often examining how children would perceive the information and how children’s literature would present the topic. Occasionally, the articles reflect on a particular author or book, others may discuss the history of a theme throughout children’s literature. Very often the articles respond to the topic described in the abstract by addressing multiple works.