This guide contains resources that explore the contributions and lives of Black and African American persons.

Black Freedom Struggle in the U.S.

Anti-Black State-Sanctioned Violence in the U.S.

The first unit covered in my Stat-Sanctioned Violence FYS class was Structural Violence/Housing Injustice. We read Lorraine Hansberry's A Raisin in the Sun, Ta-Nehisi Coates's "A Case for reparations," in addition to other supplementary materials--popular media and otherwise. The students were tasked with the creation of an art project that illustrated the ramifications of structural racism--that is, its detrimental effects on Black families, modes of resitance and transcendence, and underhanded means of maintaining racially disparate structuers (such as  colorblind tactics, personified, in one example, by a smiling and seemingly benevolent Ronald Reagan). Many of their projects were illustrations of redlining vis-a-vis the juxtapositon of predominantly white communities outlined in green, and Black communities, considered "hazardous," outlined in red.  Some students wrote poems in efforts to shed light on the topic.

Although the art projects, as stand-alone examples of protest art, were telling independent of the presentations, the presentations also brought them to life. For instance, one student reified the human costs of Black men aspiring to be capitalists--the very racist system responsible for their subservient positoins in society. At first glance, one might not recognize the flakes of flesh falling to the ground as two business men shake hands, concealing sinister intentions, but ultimately, this student argued that the intra-racial turmoil that results from capitalist aspirations in Black communities often ends in a loss of self, symbolized by the flakes of flesh.

On the other hand, digitally archiving their art divorced from their respective rationales, has its rewards. The indeterminancy compels viewers to themselves conjure the many examples of structural injustice and the attendant Black rage in other contexts--in contexts that the students may not have considered. Doing so weaves together an even more comprehensive narrative on the subject of structural violence.

The Social Justice Zine Assignment was designed for students to create and present Zines on the topic of gender – and sexuality-specific police violence targeting Black women. Each group was assigned a chapter from Andrea Ritchie’s Invisible No More.  The chapters highlight the policing of the following categories: girls, sexual violence, disability, and gender. 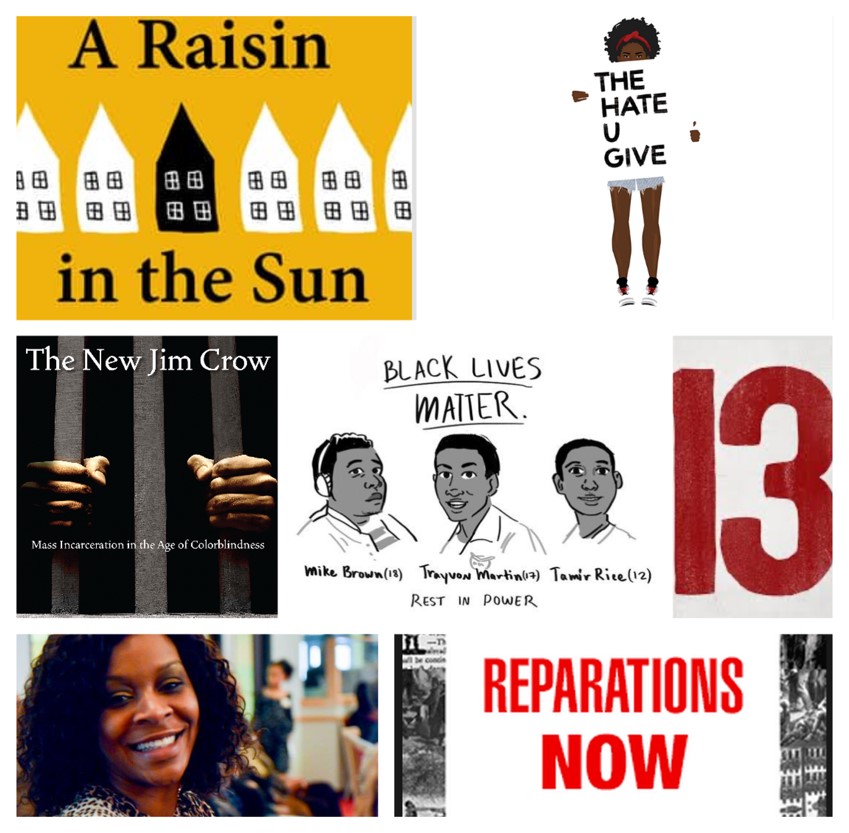 Browse these resources, and articles to feed your spirit, build your online learning program, and prompt ideas for when you’re back at school.

The 1619 Project from The New York Times and its educational resources reframe American history by highlighting the 400th anniversary of 1619, the year the first enslaved African people were brought to North America. “Doing so requires us to place the consequences of slavery and the contributions of black Americans at the very center of the story we tell ourselves about who we are as a country,” writes New York Times Magazine editor in chief Jake Silverstein on the project website.

The Future Voters Project from Teaching Tolerance aims to register all eligible students to vote and provides news-responsive classroom activities about voting. The organization will send you a viewers guide and a DVD of the popular documentary Selma: The Bridge to the Ballot. Did I mention it was free?

“I Promise” documentary series Lebron James continues to inspire, on and off the court. Watch the free video chronicling the first year of I Promise, the charter school he started.

WhenWeAllVote.com/schools Sign up and join the fight to get all eligible students to vote! The site includes action plans and tools to facilitate conversations, while former first lady Michelle Obama and musical legend Common inspire and empower our students to vote. Free printable flyers and information are available.

“Can You Really Teach Colorblindness?” “When you say you ‘don’t see race,’ you’re ignoring racism, not helping to solve it,” journalist Zach Stafford writes in this article reprinted in The Guardian. This quote truly resonated with me. So many people say it, and they think this is a good thing. We are a world full of color and diversity. I want you to see all of me—and use your privilege to be an ally.

“She Coined the Term ‘Intersectionality’ over 30 Years Ago. Here’s What It Means to Her Today.” In this brief Time magazine interview with Kimberlé Crenshaw, the author and law professor discusses the concept of overlapping social identities and the term’s lasting relevance. “It’s basically a lens, a prism, for seeing the way in which various forms of inequality often operate together and exacerbate each other.”